7 Ways You Can Get More Money in Retirement 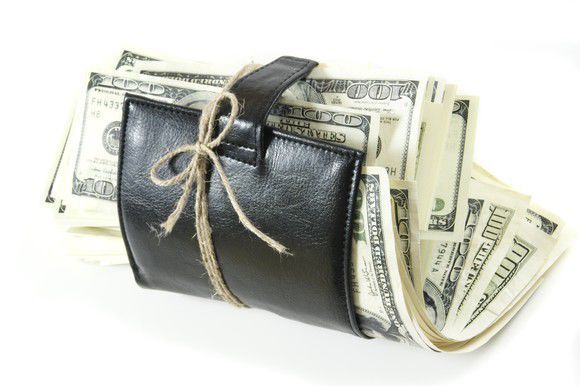 Clearly, many of us have not set ourselves up to have the money we'll need in retirement. Fortunately, though, there are some ways to get more money in our golden years.

Here are seven ways you can get more money in retirement.

1. Work a little longer before retiring

Most people probably don't want to put off retiring, but it can be a very effective strategy, giving you a bigger nest egg to retire with and fewer years that it will have to last. You might enjoy your employer-sponsored health insurance for additional years, too, perhaps while collecting a few more years' worth of matching funds in your 401(k).

Not convinced it's worth it? Well, imagine that you save and invest $10,000 per year for 20 years and it grows by an annual average of 8%, growing to about $494,000. That's pretty good. But if you can keep going for another three years, still averaging 8%, you'll end up with more than $657,000! That's more than $160,000 extra just for delaying retiring for a few years. If you're somewhat close to retiring, the table below will show you how much more you might amass over several time periods if your money grows by an annual average of 8%:

Whether you delay retiring or not, you should consider working a little while retired. Sure, it might seem to defeat the goal of living work-free, but many retirees actually find that they miss the structure and opportunities for socializing that their job provided. Many find themselves restless and a bit lonely in retirement, and a low-stress job on the side can be quite helpful.

Working just 12 hours per week at $10 per hour, for example, will generate about $500 per month -- a useful sum. If you're imagining being a cashier at a local retailer or delivering newspapers and you're not excited by that, think a little harder about work possibilities. You might do some freelance writing or editing or graphic design work. You might tutor kids in subjects you know well, or perhaps give adults or kids music or language lessons. You might do some consulting -- perhaps even for your former employer. You could babysit, walk dogs, or take on some handyman-type jobs. These days the internet offers even more options. Make jewelry, soaps, or sweaters and sell them online.

When you're living on a reduced income, it will be extra hard to pay off credit card debt or other high-interest debt, and those payments can hurt your ability to make other necessary payments. Paying off your debt before you retire will leave you with more money.

It can be OK to be still carrying a mortgage in retirement, but many people aim to have their homes paid off before retiring. Credit card debt is a different matter, though, as it can be financially devastating. Aim to pay that off pronto, no matter whether you're in retirement or are only 37 years old. It's not unusual to be charged annual interest rates of 25% or more, and on $8,000 of debt, that can cost you around $2,000 each year!

4. Make the most of retirement savings accounts

Those contribution limits might not seem like a lot of money, but they're quite powerful if your money can grow for many years. As an example, socking away $5,000 annually for 25 years will get you nearly $400,000 -- and you'll likely be able to invest larger sums over time, as you earn more and contribution limits rise. Roth IRAs and Roth 401(k)s (which are increasingly available) can be especially powerful retirement income generators, as they let you withdraw money in retirement tax-free!

Another good way to set up regular income for you in retirement is through annuities. Yes, some annuities, such as variable annuities and indexed annuities, can be quite problematic, often charging steep fees and sporting restrictive terms. But another kind -- fixed annuities -- is well worth considering. They're much simpler instruments and they can start paying you immediately or on a deferred basis.

Below are examples of the kind of income that various people might be able to secure in the form of an immediate fixed annuity in the current economic environment. (You'll generally be offered higher payments in times of higher prevailing interest rates.) 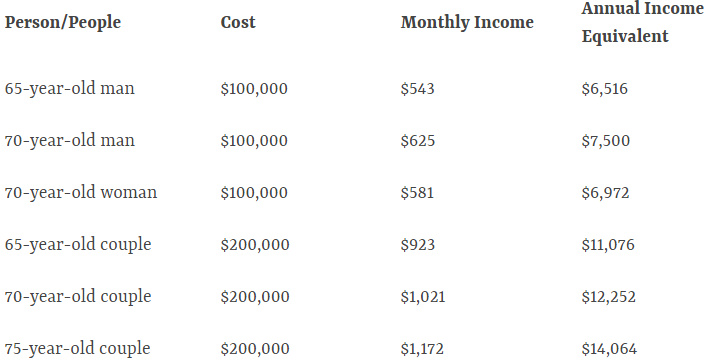 Annuities remove worries about stock market moves and the economy's current condition and keep paying you no matter what is going on in the economy. A deferred annuity can also be smart, starting to pay you at a future point, such as when you turn a certain age. A 60-year-old man, for example, might spend $100,000 for an annuity that will start paying him $957 per month for the rest of his life beginning at age 70. Deferred annuities are a good way to avoid running out of money late in life.

6. Borrow against your life insurance

Here's a retirement-income strategy many don't think of: Borrow against your life insurance. This can work if you've bought "permanent" insurance such as whole life or universal life. It won't work if you've bought term life insurance that generally only lasts as long as you're paying for it. (A note to insurance buyers, though: Term insurance is preferable in many ways.) You'll be reducing or wiping out the value of the policy with your withdrawal(s), but if no one really needs the ultimate payout, this strategy can make sense. Plus, the income is often tax-free.

7. Make the most of Social Security

Finally, think strategically about Social Security. You can increase or decrease your benefits by starting to collect Social Security earlier or later than your "full" retirement age (which is 66 or 67 for most of us), and you can get more out of the program by coordinating with your spouse when you each start collecting. For example, if you and your spouse have very different earnings records, you might start collecting the benefits of the spouse with the lower lifetime earnings record on time or early, while delaying starting to collect the benefits of the higher-earning spouse. That way, you both get to enjoy some income earlier, and when the higher earner hits 70, you can collect their extra-large checks. Also, should that higher-earning spouse pass away first, the spouse with the smaller earnings history can collect those bigger benefit checks.

There are even more ways to maximize your Social Security income -- so learn more about them and see which ones you can act on.

It's often assumed that retirees live on fixed incomes, but that's not entirely true. Social Security checks are increased over time, and there are many ways to increase the income you expect to be living off of in your golden years. Much of your future financial security is under your control.

If you're like most Americans, you're a few years (or more) behind on your retirement savings. But a handful of little-known "Social Security secrets" could help ensure a boost in your retirement income. For example: one easy trick could pay you as much as $16,122 more... each year! Once you learn how to maximize your Social Security benefits, we think you could retire confidently with the peace of mind we're all after.
Devin Consultants Financial Management in Singapore and Tokyo

Here are some solid words of wisdom on generating wealth and being generous with it as well.

You may be looking for an edge in your personal finances -- something that can help you rethink your approach to money and start getting ahead financially. If so, you might benefit from hearing what billionaires have to say and learning from their experiences. So, here are a few lessons on frugality, investing, and generosity from some of the wealthiest people in the world.
1. Live simply and be frugal
Most people don't associate billionaires with penny-pinching, but that's how famed investor and billionaire Warren Buffett approaches his personal finances. Buffet bought a relatively modest house back in 1958 for just $31,000, which was around $275,000 in today's dollars, and he continues to live in it to this day. For context, the median home price in July of this year was $313,700.
Buffett has summarized his views on success and happiness like this:
Success is really doing what you …
Baca selengkapnya 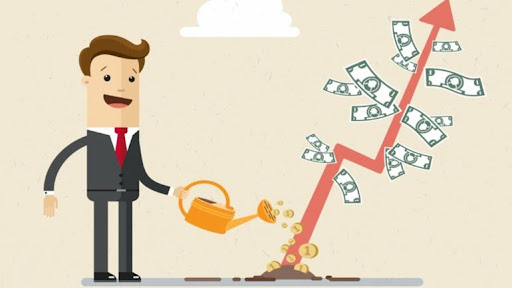 The earlier you start your retirement planning, the better. Consider starting an SIP in equity mutual funds early in your career.

Many youngsters believe retirement is a distant reality, planning for which can be pushed back some years. What this usually means is that those in their 20s often feel they are too young to plan for their retirement! However, retirement planning becomes essential once you understand that eventually you will retire one day and your monthly pay cheque will cease to come. You need to build a substantial corpus during your working life for your money needs during retirement years.
Actually, the earlier you start the better. “Start an SIP in equity mutual funds early, maybe when you are 25. The amount you invest at this stage may not be much but even Rs 1000 invested every month will grow substantially. This amount will compound for the next 35 years and beat inflation - which is the whole point of planning for retirement early on,” said ER Ashok Kumar, CEO and…
Baca selengkapnya

You can save hundreds -- or even thousands -- of dollars by employing some of these tips. In the process you may end up better prepared for retirement, too.

A major tax bill has been passed, and in the years ahead many Americans will be paying more than before, while many others will pay less. Folks in both camps will still want to minimize any sums they pay Uncle Sam, so here are some tax tips to help many taxpayers shrink their bills.

Note that many of these actions can be taken throughout the year, not just at the end of the year or come April. For best tax-minimizing results, think about and tend to your taxes all year long.

Tip No. 1: Learn about changes to the tax laws

Few people are eager to read up on taxes, but the new legislation ushers in so many changes that it's worth becoming familiar with many of them, in order to best plan. For example, many tax deductions are ending in 2018. These include:

Personal exemptions. These allowed many taxpayers to shrink their taxable income…
Baca selengkapnya